“Serrano is a master of all styles” —Rhythms Magazine

“From George and Ira Gershwin’s ‘I Got Rhythm’ to the deep blues of Sonny Boy Williamsons’ ‘Eyesight To The Blind’, via hymns and even a version of ‘Danny Boy’, this was an adventurous show that ranged far and wide – all delivered with a jaw-dropping dexterity on an instrument that’s often derided as limited. In the hands of a master like Serrano, that’s very evidently not the case.” — Songlines Magazine, UK

Antonio Serrano is a virtuoso of his instrument, one of the biggest names on the current Spanish jazz scene and one of the most sought after session musicians in the country. Endowed with an atonishing technical facility and deep theoretical knowledge, Serrano also shows an enormous musical versatility that is faithfully reflected in his long history of collaboration. His harmonica moves with equal ease in musical fields as far apart as jazz, flamenco, pop and classical.

He has shared the stage with artists such as Barbara Hendricks and Placido Domingo, with countless Classical Orchestras in Europe, Wynton Marsalis, Lou Bennet, Toots Thielemans Vicente Amigo, Clarles Benavent and the great Paco de Lucia amongst many others.

Antonio Serrano is known for having introduced the harmonica to flamenco and for 10 years he was part of Paco de Lucia´s band. In 2014, the Berklee Mediterranean Music Institute awarded him the Mediterranean Prize for Music Masters for his revolutionary contribution to this style and recently received a Latin Grammy for his role in the recording of ENTRE 20 AGUAS: A LA MUSICA DE PACO DE LUCIA. 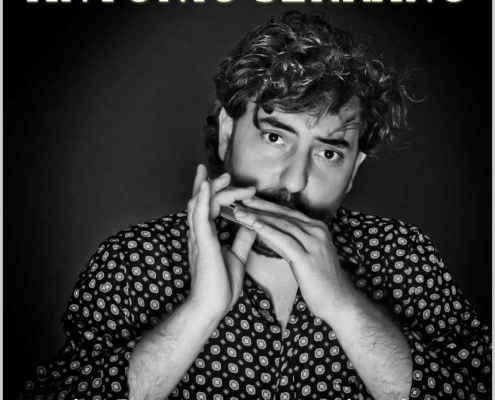